Yael Ernst | Stillbirth & After
Departing From Silence To Freedom 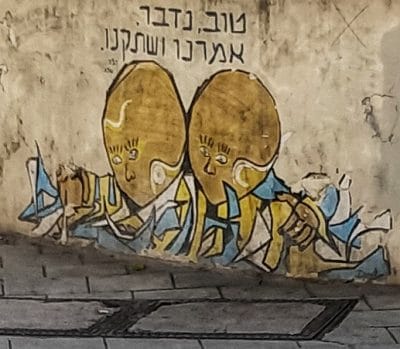 Years before I had my stillbirth with Ayelet, I went through sexual trauma.

This trauma took over my life primarily through fear. Thanks to successful therapy sessions (which were at times also scary. And challenging. And exhausting. Sometimes it felt like it took me hundreds of years to go through it), I conquered fear and chose to be in the light.

I mentioned fear as the decision-maker in my life at the time. Another constant companion was silence.
Silence was involved with each trauma I went through. It was also present in other trauma stories I heard from friends and read about in books.

How is it that silence is the one thing that most traumas have in common? Thinking about it rationally, it doesn’t make sense. After all, we didn’t do anything wrong; others did us wrong. It’s almost like a given: something happened, and we’re not going to talk about it. When I talk about being silent, I don’t mean just the actual act that caused the trauma but being quiet altogether, about how we feel, and about what’s going on in our head. Just not talking and being silent.

I read a bit about silence, trying to figure out why it is so present in our lives, and here’s what I found out:

As I stated before, silence can be found in various traumas: Holocaust survivors and 2nd generation, PTSD, child abuse (sexual or physical violence), and also, stillbirth.
I recently started reading the work of Dr. Yochai Ataria, which is fascinating, even though I don’t always understand or agree with him. Dr. Ataria mainly talks about PTSD, and this is what he has to say about silence: “trauma is an impossible situation. It is something between a nightmare and a delusion. A state in which all sets of rules, beliefs, hopes, and expectations collapsed. There are no explanations but complete horror. The post-traumatic person is, therefore, representing a condition in which all words are truly gone. Words are a system of symbols that are completely detached from the experience. Trauma leaves words out and causes them to be foreign. This is why, in a PTSD state, it is not possible to use the every-day language to describe the world behind the curtain. Words don’t describe or explain. They obstruct. Any kind of testimony is damaging the authenticity of the original experience. Speaking up turns the impossible to “just another story.”
Dr. Ataria further explains that reality is a world of words. Silence is the primal protest of people who went through trauma. Trauma is a different world. Through silence, they express they have reached the lowest point, and they refuse to cooperate with reality, with the world.

As a woman who has been talking about her traumas for several years now, it is understandable to see my problem with Dr. Ataria’s explanation of silence.
Of course, I can understand his meaning. I felt like this with my traumas before I started to deal with each one of them.
How can we even begin to describe stillbirth? Every word belittles all I went through during those two days, from the moment I was told my baby girl Ayelet died inside my womb and all the daggers in the heart like experiences I was served by reality. Each of these experiences prompted me to seclude myself more and more.

However, it is a known fact that words have power. In the wrong hands, this power is abused. But in the right, delicate, sensitive hands, words can empower and us.
My therapist and I shared many words. Many times they were trying, painful, awkward words.
Who wants to sit and feel shame from head to toe? Not me.
Who wants to feel guilt floating around, threatening to paralyze one’s heart? Not me.

Nonetheless, these words were spoken. Yes, they released shame and guilt in all their glory (and other emotions), but these words also helped bring these emotions back to their normal proportions.
It’s been nine and a half years after the stillbirth, and I can sometimes feel guilt over my girl Ayelet’s death. But I now know it’s not true. Thanks to those words I spoke at my therapist’s office, I know the answer to that creeping thought. This is the empowerment I needed to feel I can lift my head and keep it up above the difficult swirling emotions I felt after my stillbirth.

Dafna Ben-Zaken speaks talks about the Holocaust trauma, which was never talked about in her family but was felt throughout her childhood.
The silence was loud and very present.
A combination of Freud’s findings and Lacan’s approach explains silence: “It is a tear which was arbitrarily made and has no logic or meaning. It is a tear that leaves the subject without the defense of language. The injury will always show up suddenly and violently, leaving us shocked and distressed, and we try to collect residuals of words in which we try to understand what happened.”

Freud established an element of repression in dealing with trauma. Lacan added: when facing certain traumatic moments, we are verbally unable to express what we went through.
These can explain the experience of women after stillbirth. Many women are not interested in facing the stillbirth they went through because it is too hard even to try and talk about it, and all it’s affects on their body and soul. Their only wish is to move on, towards the next baby, in a desperate desire to give birth to a live baby.
I can understand that. Of course, I too wished for a live baby with all my heart. But a live baby can not erase the loss I went through. The live baby can not replace the baby I lost.

Repressing can not delete something that already happened. Repressing pushes the trauma away from us, but the trauma stays embedded in us in so many ways. The longer we remain silent and not talk about it, the trauma will penetrate deeper and deeper.
The goal is to integrate trauma into our lives, so it won’t be a force which runs our lives.

Departing from silence to freedom

It’s challenging to describe in words what we went through. That is why it’s easier to remain silent and not talk about it.
In the long run, this silence took a hefty toll from my life. I realized that although I didn’t want to talk about my experiences at all, I didn’t have a choice anymore. I had to talk about all of them.
I found that my ability to put my most inner secrets and fears into words is one terrifying experience, but at the same time, it marked the beginning of my healing journey.
I found that through telling my stillbirth story and talking about everything I went through, I can validate someone else’s stillbirth story, validate all her feelings and her sense of loss.
I found I can live my life as I see fit, and not be blinded by fear and missing out on so much.

This continues to be almost a daily mission for me, conquering the restraint of fear. It was present in my life for so many years, but I am overcoming fear again and again, and this, to me, is the true meaning of freedom: the power to act, speak, or think as one wants without restraint.
All this starts with words that come from the heart, the womb, the soul.

*Photo: street art in Tel Aviv, saying “ok we’ll talk, we said. And we were silent”